I write a fair bit, and that means coming up with many characters. Unfortunately, this is not my strong point. I always feel like my characters are one-dimensional and poorly thought out. Still, I like them. Which is one of my biggest problems. I like all my characters. But I feel like some of the neatest characters are those have traits that make them somewhat unlikable.

My typical character is an unlikely hero who rises against all odds and triumphs over evil. Which sounds really, really lame. But to me, reading and writing about those kinds of characters is fun and rewarding. I’m a romantic, and I like the grandiose. To me a fantastic scene in a story is one with a battle in which characters must struggle against themselves and their enemies, preferably with lots of magic and some witty dialogue. I understand, however, that not all scenes can be like that, and that it the reader’s (and writer’s) connection to their characters that makes such epic scenes so rewarding. 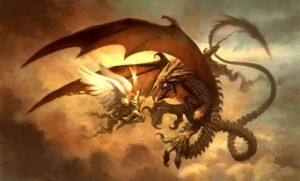 A typical fantasy scene which for many people I’m sure is overdone and cliche, but I’d enjoy it. I guarantee it.

I have two projects in their infancy that may end up having lead characters that don’t fit my usual profile. One is a fictional autobiography about a noblewoman who lives through a revolution. She is a frivolous, weak-willed girl, a far cry from the strong female characters that are so typical of young adult fiction (and my writings). Still, she is a reasonably intelligent and somewhat kind woman, so I can still like her.

The other character is on a completely different spectrum entirely. He’s a middle aged smuggler in a futuristic world. A bitter and greedy man on the fringes of society, he definitely isn’t the norm to me. I would love to start developing his character a bit more, to see if it’s even possible for me to write about someone I don’t like. But I need a plot to go with him, and until that gets going that project is on hold.

For me, writing about or form the perspective of likeable and heroic characters is enjoyable. Still, I think that too much of them can spiral quickly into a book that loses all sense of realism and is hard to relate to. Without a doubt one of the areas I need to work on as a writer is my character design and development.