So I have to admit I’ve been pretty lax about posting regularly on this blog. I was away a lot during the month of May, so that might have something to do with it. Still, there is some good news. Although I haven’t been posting, I have actually been doing lots of fun and creative stuff. Since the end of Camp NaNo, I’ve been working on rounding out the world the characters from that book live in, and taking a long, hard look at the plot and premise of the series. So far that’s gone very well, I’m doing lots of world designing, character design, and other fun things.

Another thing I’ve been doing a crazy amount of is painting. In the past month or so I’ve finished five acrylic paintings. I’ve neglected to post about them for two fairly lame and fairly stupid reasons. 1) I’m lazy. Very, very lazy. 2) I couldn’t seem to get a good photo of the paintings, and didn’t want to misrepresent them. I’ve decided the time for being lazy is over, and I’m going to use subpar photos and hope the true wonder of my paintings shines through. 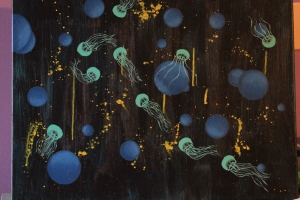 These three paintings are part of a collection called The Trimurti, after the Hindu holy trinity, which consists of Brahma the creator, Vishnu the preserver, and Shiva the destroyer. I originally started with an idea of sludge monsters on cubes attacking a praying Buddha (this was before I switched the theme to Hinduism – luckily in one sect of Hinduism Buddha is actual considered an avatar of Vishnu!). I’d finished painting the cubes and the sludgies (as I like to call them) when an idea with spheres and jellyfish popped into my head. I immediately painted that one and then realized I had a blue painting with spheres and a yellow painting with cubes. The obvious next step was a red painting with triangular prisms.

At this point I had a bit of a concept going, though it was largely by accident. I had originally wanted to call the Buddha painting ‘Enlightenment’, so I started thinking about what the other ones would be. The blue painting was calm and peaceful, and somehow reminded me a bit of primordial ooze, so I dubbed it ‘Creation’. Therefore the red painting, which was angry by virtue of being red, easily fit the profile of ‘Destruction’. So those were my working titles, but when I finished the paintings one of my roommates suggests the theme of the Trimurti, and it seemed to fit extremely well. So that’s the tale of my first ever series of paintings, I hope you enjoy them. By the way, the purple in the photos isn’t part of the paintings, its my room colour. More paintings to come soon, I promise!

One thought on “The Trimurti”